Had a quick visit to the market today and found this little fella….for only 50p,

and I think I’m going to be busy as I managed to get this lovely box of apricots for only £6.00.

…..best so far I think. Missed the dandelions this year, but next year when the sun is out I’m definitely going to rip their heads off! 🙂

Yes it does work, I hadn’t heard of it before but it’s yummy!

Chop and place these into your preserving pan or largest sauce pan and add 1 kg bag of sugar and juice half  a lemon, then stir.

leave for a few hours until the sugar draws out the juices.

heat slowly until sugar has dissolved and then bring to the boil, continue until setting point is reached. (I did squish with a potato masher a bit because strawberries do had a tendency to stay whole). 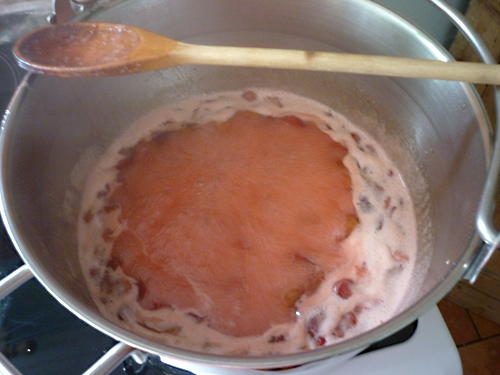 pot up into sterilised jars

and finish off with a nice fancy label. 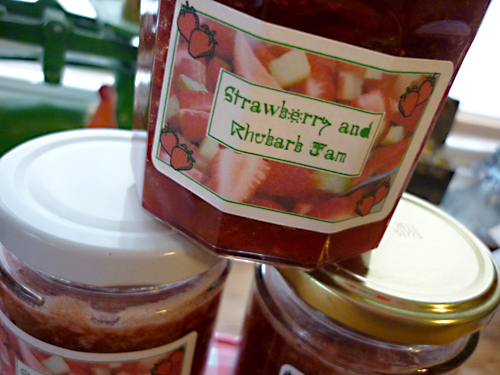 If not for yourself, this can make a lovely present. I love it when a friend brings me homemade jam to sample! 🙂

Believe it or not you can make wine from walnut leaves and we have a walnut tree in the garden.

You have to pick the leaves while they are young when they are quite fragrant.

after processing with oranges and yeast, the resulting liquid is now in the demijohn to ferment. 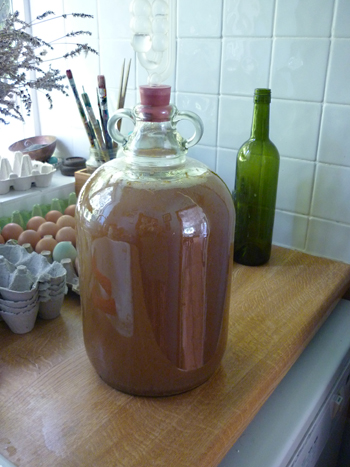 There’s lots to learn about wine making but I’ve found a brew shop in Norwich where I can get all the help I need!

Just been to the Good Life Home Brew Centre in Norwich for some supplies (very helpful place by the way).  As my Dandelion wine seems to have potential it has encouraged me to continue with my wine making. 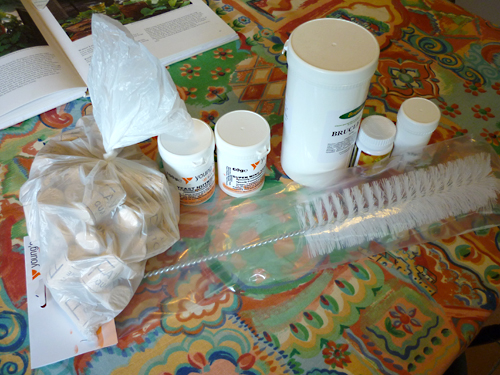 For Missybowers who wanted the Dandelion wine recipe I used Click here to take you to it!

….had a little taste, which is unavoidable when siphoning off, and well I think it’s my best wine yet. It will be even better chilled! 🙂

I know I’ve spelt dandelion wrong on the label, Keith pointed that out!

At last I have got around to racking off my dandelion wine I started last summer. It’s very over due and soon it will be time to bottle it. I’ve syphoned it into another demijhon and it looks and tastes like it should be a good wine.

I think I’ll bottle it in two or three months time, which doesn’t mean that’s when we can drink it though!

Because of the art projects I’ve been doing, some of my surplus veg etc have been hanging around for a while. I’ve had some Apples someone gave me in a basket in the pantry, some green tomatoes in the fridge (yes still ok!) and believe it or not a couple of courgettes still surviving out side! So yesterday I decided to do this lovely river cottage recipe that I remembered I Liked.

This lovely pickle is a fantastic way to use various summer veg gluts, and overgrown courgettes are one of my favourites. You can alter the recipe according to what you have, and chop and change the spices to suit your taste, too. Makes about 10 jars.

1kg courgettes, unpeeled if small, peeled if huge, cut into 1cm dice (or use pumpkin later in the season)

750ml white-wine or cider vinegar, made up to 1 litre with water

For the spice bag

A few blades of mace

Put the vegetables and fruit in a large, heavy-based pan with the sultanas or raisins, sugar, vinegar and water, chilli flakes and salt.

Heat the mixture gently, stirring occasionally to dissolve the sugar, and bring slowly to the boil. Simmer for 2-3 hours, uncovered, stirring regularly to ensure it does not burn on the bottom of the pan. The chutney is ready when it is rich, thick and reduced, and parts to reveal the base of the pan when a wooden spoon is dragged through it. If it starts to dry out before this stage is reached, add a little boiling water. 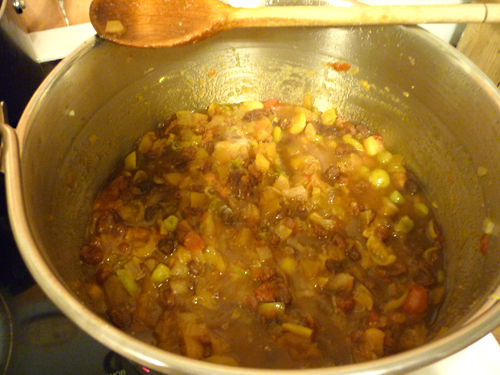 Pot up the chutney while still warm (but not boiling hot) in sterilised jars with plastic-coated screw-top lids (essential to stop the vinegar interacting with the metal). Leave to mature for at least two weeks – ideally two months – before serving. 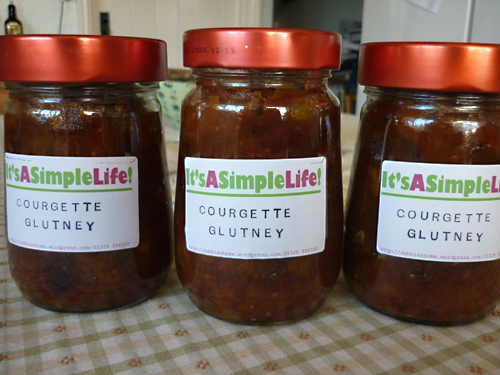 …although I do still have a few oranges left! I try and make enough preserves to last us the year as we are aiming for the self-sufficiency thing! This marmalade is made nice and dark by adding a couple of table spoons of treacle, which is cheaper than buying brown sugar.

I’ve been catching up with my preserving, because of the limits of the broken arm scenario I didn’t get much done in the autumn.

Keith has designed me some new labels….

I really like them, what do you think? I haven’t shared the recipes as the fruit is not in season, but if you want them just let me know.

A glimse into my ongoing journey of slowing down, living more simply, consuming less, re-using more and enjoying the life I have been given.

A gentle tongue is a tree of life. 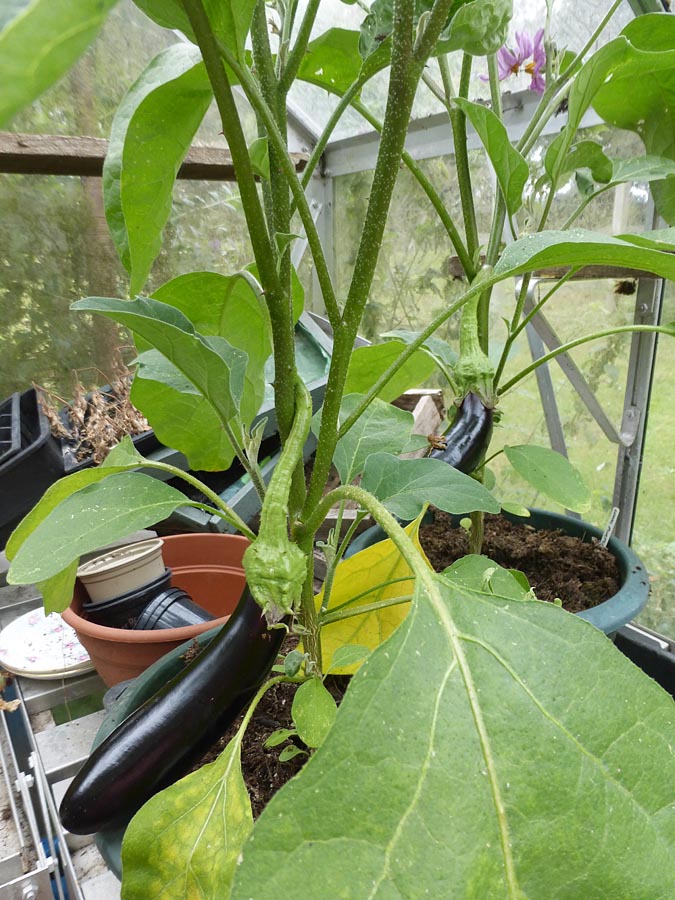 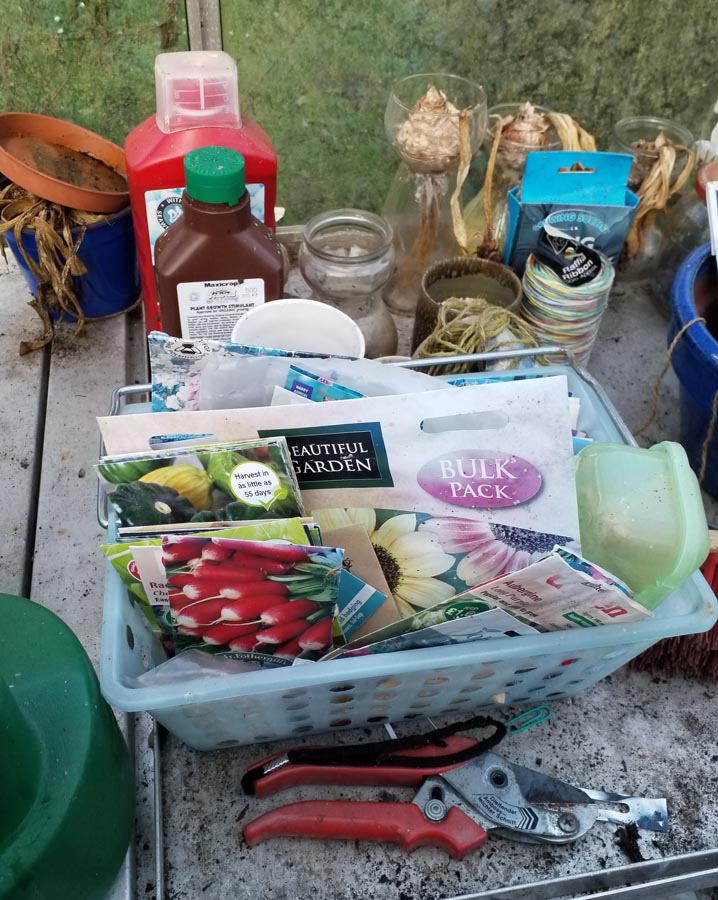